Xbox One Controller Update | Beyond Entertainment

Since last months Xbox One press conference there has been a lot of questions about the system, especially the controller itself. Today Major Nelson cleared up a lot of the confusion with a article on his website alone with clearing up some other questions on twitter.

Impulse Triggers – Xbox One’s Wireless Controller sports four vibration motors – a small one behind each trigger that adds precise haptic feedback to the finger tips, and a larger in each grip for large scale rumbles. This gives users a sense of in-game directionality and depth, creating rich, immersive experiences where gunshots, car crashes and explosions can come to life.

Higher Quality Headset Audio – The data transfer rate between the controller and console has been improved, allowing for higher fidelity audio in communication headsets. In-game chat over Xbox Live, according to the team, will be in many cases clearer than talking on a phone.

Revamped Thumbsticks – The thumbsticks are built for precision and comfort. They’re smaller and outlined with a knurled texture for better grip. Competitive gamers will be pleased to hear the sticks require 25 percent less force to move, allowing you to adjust your aim in a first-person shooter or execute a half-circle sweep in a fighting game faster and more accurately. The controller also uses advanced electronics that reduce thumbstick deadzone in the center.

Brand New D-Pad – The old Xbox 360 D-pad is replaced by a new design that pays homage to classic controllers and is architectured to deliver more precision and tactile feedback for gaming. The D-pad’s cross shape is honed to provide accurate cardinal direction input, sweeping movements and combinations – important factors for sports and fighting games, and other experiences.

Buttons, Buttons, Buttons – The A, B, X and Y buttons are lower to the controller with tighter spacing, making the transition between each one smoother. A new, three-step manufacturing process gives these buttons a more premium look, as if the letters on them are suspended in 3-D space. The size and placement of the Xbox button has also changed so the view and menu buttons are more accessible.

Seamless Connectivity – Each controller uses a combination of invisible reflective technology and LEDs to send a patterned infrared signal to your console and Kinect sensor. Not only does this make pairing the devices seamless, but it enables Kinect to associate the controller with whoever is holding it. This introduces innovative experiences, such as player switching, where a split screen display can swap positions on the TV if users change seats on the couch.

Low Power State – If you’re watching a movie or need to step away from the TV, the controller enters a low power state that conserves your battery. The moment you pick it up again, it will be ready for use without having to resynch with the console.

Refined for Comfort – The controller’s design is deliberately honed to the closest tenth of a millimeter to offer the most comfortable fit in users’ hands, and was tested extensively by a broader age group than ever before to ensure it is optimized for as many people as possible. According to the team’s research, this improves gameplay performance and allows comfortable gaming for longer periods of time.

Angled Triggers and Bumpers – The triggers and bumpers are carefully designed for performance and comfort. The specific angling allows for a natural fit for your fingers, and the triggers require a lighter pull, so squeezing it repeatedly is an easier and more precise action.

Internal Battery Cavity –The compartment that houses AA batteries is built into the interior of the controller, providing more room at the bottom for your fingers to grip. Another convenient improvement is that the controller is both wireless and a wired– simply plug it into your console with a mini USB cable and the connection automatically switches to preserve battery life. 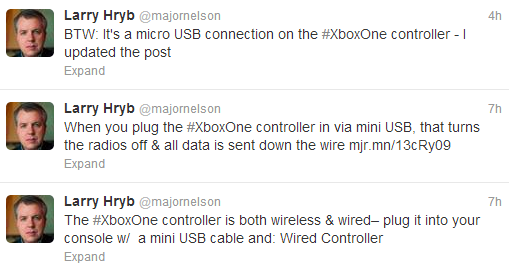 There are 33 comments
Leave a Reply