Greetings, fans of Halo eSports! This weekend is the Halo World Championship 2016, and not only are there some incredible matches in store (as well as the crazy series and upsets from Day 1), but there are also a few Halo-themed reveals that are going down on stream! Included in these is a reveal of Warzone Firefight, a new Warzone mode coming later this year.

However, at the beginning of the HWC stream this Friday, Bravo surprised everyone when he switched to the very first look at Observer Mode a new Spectator overhaul for Halo 5: Guardians. 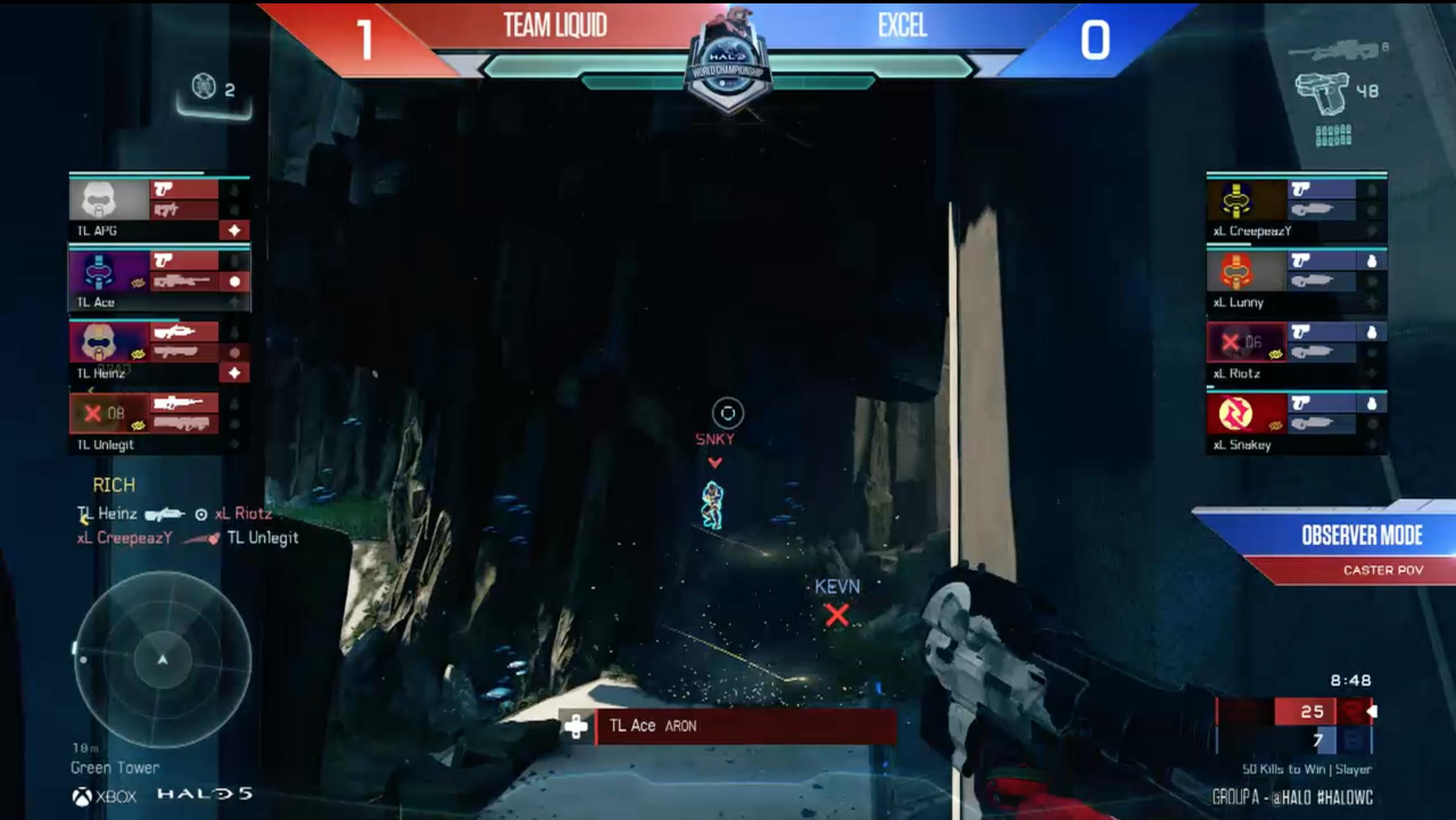 As you can tell from this image, the Observer Mode introduces tons of new improvements that will improve both HCS broadcasts, as well as our very own #ASTROSpartans Tournaments that are held monthly. This is a great introduction, but I’d like to dive deep into the Pros and Cons of this new feature-set, and provide my feedback accordingly.

To start off, let’s just point out that the organization looks fantastic. Shield statuses are an unexpected but elegant addition, and respawn indicators are beautiful. It’s amazing being able to see not only the timer of each player’s respawn, but also the amount of people who are alive/dead without having the player press the Back button for us.

Weapon Indicators are also beautifully organized and are another welcome addition. Not only do they add great information for commentators to focus on, but the color accents and organization are well designed. Having Secondary Weapons faded out, as well as every grenade that a player has equipped/available is awesome for spectators and commentators.

The U.I. for the actual player cards is fantastic. The size and spacing are very well done. Ideally I would suggest pushing them fully to the sides of the screen, but if I had to guess I’d say that it would interfere with TV title-safe dimensions, so I understand if they need to remain where they are.

For every eSport, major score lines and scoreboards are at the forefront of the Spectator Mode. Halo 5’s scoreboard is a minuscule component that exists at the very corner of the screen. I suggest moving the scoreboard to either the top-center or bottom-center of the screen with a larger size, to promote visibility of the scoreline in any game mode. If it is moved to the top of the screen, the HCS Production team will have to move the series score to a different section of the viewing plane.

The new radar indicator (Yellow Eyes in the above picture) is an ambitious addition, but is conclusively unnecessary, in my opinion. It appears and disappears far too frequently to provide strong information for a spectator. In the end, it appears to become more of a distraction rather than a tool to relay information. Having eight yellow eyes appearing and disappearing at once is a bit tedious to keep track of.

Introducing a minimap of sorts that identifies players locations and movement has been a frequently requested addition to Spectator Mode since Halo 5’s Beta. The argument against it is that it will likely cause too much clutter on the screen alongside overlays and the Observer Mode UI, which is understandable.

My suggestion is adding a controller command (Left or Right Bumper, perhaps) that will remove the Observer UI and slightly darken the gameplay feed to bring up a map (center-screen) with all 8 Player locations. This will provide an optional but useful tool that does not clutter the screen when it is unneeded.

We’ve already commended the excellent display of respawn timers in the new Observer Mode, but I’d like to take that indicator of player status one step further. When a player picks up a Powerup, be it Overshield, Active Camo, etc., the Camo timer that normally appears above their shield bar (which is covered by the HCS Overlay anyway) should appear over their emblem, so Spectators and Commentators can appropriately view who has Camo/Overshield, and how much time/shield they have remaining.

The ability to rotate player POV’s and select individual players has improved since the launch of Halo 5: Guardians, and hopefully it will improve once again with Observer Mode. Currently there are three ways to select a player’s point of view:

Currently, these methods offer a decent selection of options, but with the new player cards on screen, Observer Mode has the potential for the most efficient method yet. Ideally, 343i should add the ability to scroll through the player cards on screen with the D-Pad and press the A Button to switch the highlighted player’s POV. In the picture below, you can see that x5 Colt’s player card is highlighted, leading me to believe that this feature may be included after all, but we have no confirmation as of now. 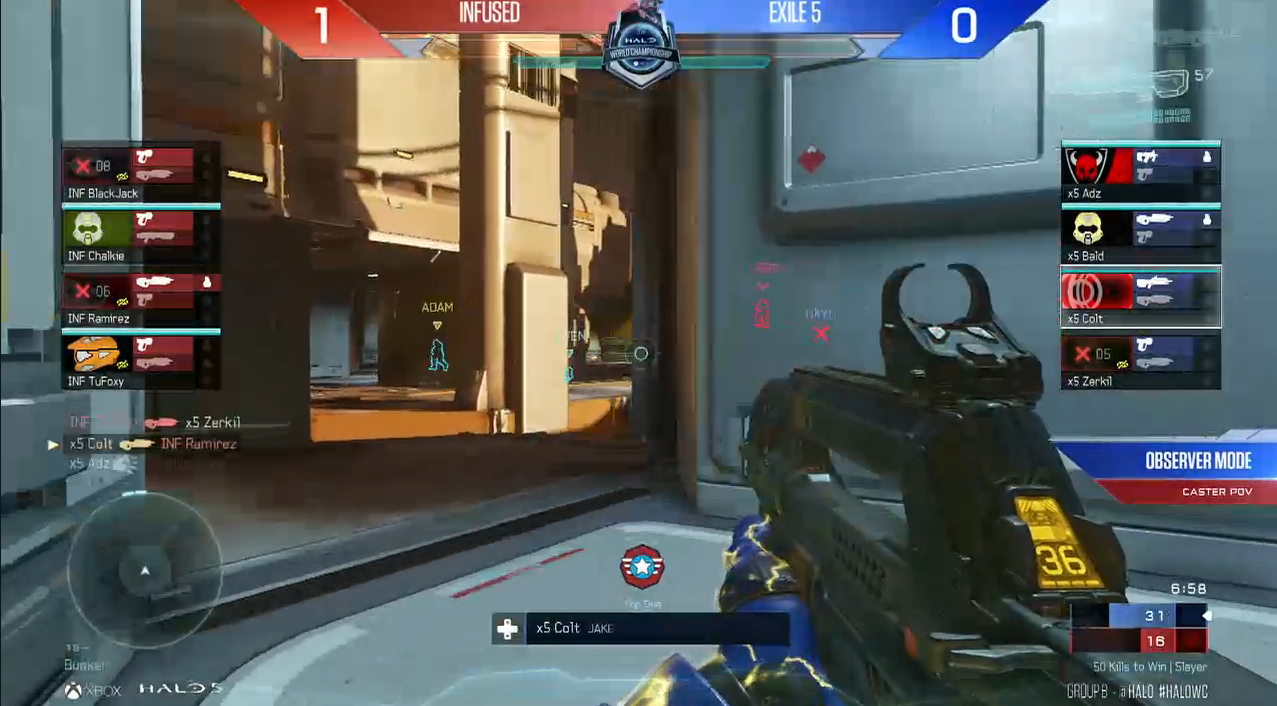 It has been confirmed on Twitter via Bravo that Observer Mode is an in-lobby feature, meaning there is no time delay when spectating matches. The player who wishes to spectate will select an Observer Team in the lobby to be put into spectator mode. It has also been stated that 343i is still continually tweaking and refining the mode, leading us to believe it will be released in an update sometime soon.

That leaves the question: What will happen to the standard Spectator Mode?

Player Cameras are a beloved feature of Halo streams, showing players reactions to incredible plays and “putting a face to the gameplay” that is on screen. With Observer Mode, player cams become an issue. Normally, there are 8 separate video feeds with a player cam/name card attached to each of those feeds. With Observer Mode, there is a single feed that rotates all 8 players POVs. This creates an issue because it is tedious and difficult for a production team to constantly rotate player cams to the players that the casters are switching to, especially if they quickly flip between multiple players.

My suggested solution is to introduce a more broad Team Camera that shows all four players in the booth. This way, the production team can easily and more effectively remain in sync with the Casters who are running Observer Mode. They can simply switch to Red or Blue team’s camera when necessary. This can also become even more efficient if given audible cues from the Commentators – “and now we’ll hop on board with the Blue Team, starting with Lethul’s POV”

The new Observer Mode in Halo 5: Guardians is a major step forward for Halo eSports, and we’re looking forward to seeing the final product in an update arriving soon! Discuss the new features and your feedback on our forums!