Congratulations to Mister Ryno for winning the tournament!

1) Join our Discord Server to communicate with Admins and other players.

2) Identify your Group # and opponents. Contact your host and join their lobby. Instructions for hosting and joining lobbies can be found below.

3) Compete in your Free-For-All match. At the end of your match, record a screenshot using the Xbox One capture feature or a mobile device.

4) Report your scores by sharing your results photo with us on Discord or Twitter.

The first person on the list in EACH heat is responsible for hosting the lobby and inviting all the players in THEIR group.

If the 1st player in your heat does not show up, a Beyond staff member will host the lobby and invite the players in your heat.

If you run into any issues with your party, please message an Admin on the site, Discord, or Twitter.

1) Beyond Tournaments utilizes a slightly modified ruleset for our FFA competitions, based off of the official HCS rulesets for Halo 5: Guardians.

2) You can find the appropriate maps and gametypes under the Bookmarks of the gamertag "Beyond Settings".

Players: 8 players per round, Top 4 advance to next round

To access the official tournament map/gametype, you can either add the gamertag “Beyond Settings” to your Xbox Live friends list, or search for the gamertag in Halo 5’s file browser. 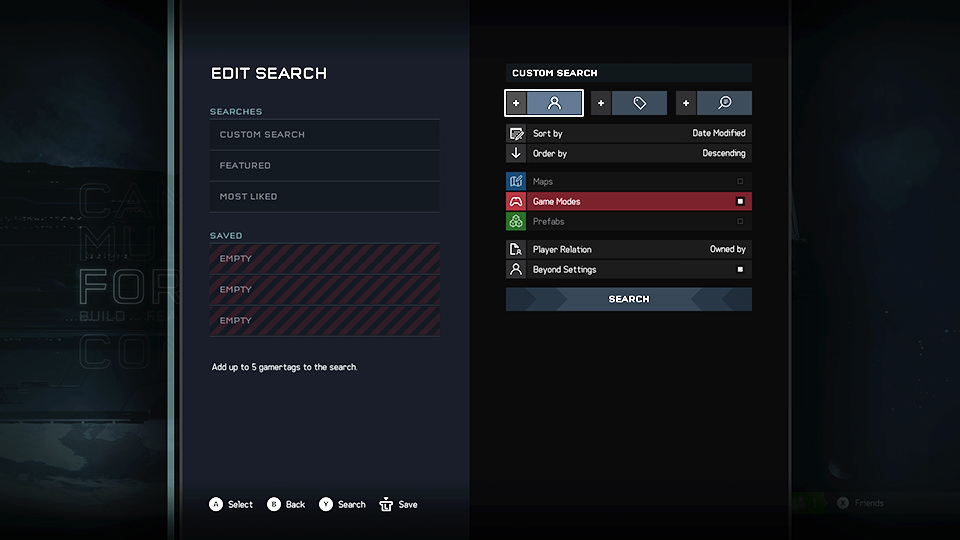 1) Each player has a total of 10 minutes to show up for their match. After 10 minutes, if there are enough players, the game will begin.

2) If you do not receive an invite from your group's host, please contact staff to troubleshoot Twitter or Discord.

1) Your match must be completed at the scheduled round time Under certain circumstances, Beyond staff holds the right to force a match result if a team violates rules or causes further issues.

2) If the 1st player in your heat does not show up, a Beyond staff member will host the lobby and invite the players in your heat.

3) A connection test is highly recommended to avoid issues during your scheduled match. Simply load a map that is not in your schedule. If you are having issues connecting to dedicated servers in Halo 5: Guardians, attempt to resolve your connection issues before your match begins. If the match is unplayable, please contact a Beyond Staff member by filing a dispute on Discord, Twitter, or private messages on Team Beyond.

4) Each player is given a maximum of ten minutes in between games in their match. Whether you’re taking a break, going to the restroom, or discussing strategy, after ten minutes, the game must be started, otherwise the players that are not ready to begin will forfeit that game.

1) If a player disconnects during the match, the game will continue and the player that disconnected may rejoin the game.

2) Abusing these rules by deliberately leaving matches or manipulating connections will lead to a ban.

3) If the player/host responsible for hosting the lobby in a tournament, starts the match before the designated round start time, that player/host of the lobby will be disqualified.